You are here: Home / Dialogue Seminars

A series of events were conducted within the third phase of the Civil Society Dialogue Program to bring together the actors who play an active role in the improvement of societies’ mutual perceptions in Turkey-EU relations and mutual understanding. Under the scope of the program, Dialogue Seminars were designed to support the establishment of a network between representatives of media, CSOs, and public officials.

The seminars are planned as two-day events, and will have a format which mixes a conference-like plenary opening, followed by a series of workshop sessions.  The contents of the seminars and the methodology for their delivery are based on the conclusions of an assessment conducted last year and a participatory planning process where nearly 60 representatives of the media, CSOs, and the public sector gave their opinions.  The objectives of the seminars are three-fold:
1.    Increase communication & dialogue on EU issues.
2.    Strengthen the role of media in the accession process.
3.    Enhance media/CSO relations with public sector on EU affairs.

Experts from three sectors shared their experiences with the audience during the first day of the 2-day seminar with the panel titled To Understand, Express, Agree. The panelists had the opportunity to assess the roles they play in Turkey-EU relations and the studies performed to inform the public about the accession process during the workshops held after the panel. 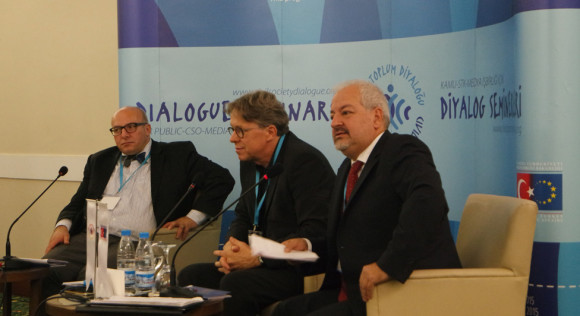 After the seminars, a study visit to Brussels was organized between 25 and 29 January 2016 to see the best practices in Europe. Representatives from public organizations, CSOs and media visited Turkish Permanent Representation to the European Union, European Movement International, European Network on Independent Living (ENIL), Europe Parliament, Brussels Press Club, Schearbeek Municipality and TOBB/İKV and discussed the public-media-CSO relations from the perspectives of European and Turkish business world.

Lists on what to do and what not to do to ensure that our concern, message, story and the project shine amongst the tons of information and draw the attention of the editor, the correspondent or the press member were also prepared during the workshops.

ATTENTION! DO NOT FORGET!

Yeşim Gözde Ersoy
She studied marketing communication at Charter Institute of Marketing, England. She worked in the British Council Turkey Office Communication and Marketing Section for many years. She was responsible for the communication design and implementation, PR and promotion activities of the culture, arts, science and social development projects run in the Eastern Europe Region covering seventeen countries. She has been working as the communication expert in Civil Society Dialogue Program since 2011.

She supported the group works during the workshops held within the scope of the dialogue seminars and helped participants to develop road maps to strengthen the communication amongst sectors.

Çiğdem Arşıray
She studied business administration and economics at the University of Minnesota and completed the master’s degree she started at Lehigh University, at Boğaziçi University. She completed her doctorate courses in organizational behavior at Marmara University. She has more than 20 years of experience as trainer, facilitator, and project manager in large and medium size organisations and EU funded projects. Arşıray has professional experience in capacity building and coaching.

She supported the group works during the workshops held within the scope of the dialogue seminars and showed ways and gave tips to CSOs to ensure that their messages, stories and projects draw the attention of the media.

Prof. Dr. Abdülrezak Altun
Abdülrezak Altun, academic at Ankara University Communication Faculty, has completed his post graduate study and doctorate in journalism in the same university. He started his career as a correspondent in Anatolian News Agency in 1985 and then moved to be an academic at Ankara University in 1990. He has been providing consultancy services to public and international organizations as part of many EU-funded and national projects.

Having an extensive experience in three identified sectors, Prof Altun will be sharing his experiences in media, public and academic life in the Panel.

Andreas Treske
Born in 1963 in Germany, Treske studied German Literature and Film. Since 1998, he has been teaching communication and design, digital media and cinema, radio television at different universities across Turkey. Currently, he is an academic at Bilkent University, teaching Communication Design and Media and Design at post-graduate level.

Zeynel Lüle
Zeynel Lüle worked as the General Secretary and Head of Press Association at the European Parliament from 1987 to 2000, and remains as a board member of the European Journalist Association. Having worked in a series of media outlets such as CNNTürk, Kanal D, TRT Radyo, Hürriyet Daily, Zeynel worked as the Brussels correspondent of Hürriyet Daily and CNNTurk from 2000 to 2010.

In the panel To Understand, Express, and Agree, Zeynel analyses and illustrates the co-operation amongst Media-CSO and Public from a journalist perspective.

You can access the seminar photos at Gallery section.